I picked up a Nokia 770 out of curiosity. Aside from some obvious and annoying quirks (which probably have been corrected in newer models) it's a pretty neat device. The 770 like the N800, and N810 has USB host mode, with the added limitation that it can't supply power to USB devices connected to it. So I set out to build a battery box that does just that. The box contains a 1000mAH Li-Ion battery, the 5v Boost Converter I built previously, and picoChg v2, which is a redesign of my PCB for the Linear LTC4054-4.2 Single Cell Li-Ion charger IC. The video shows it working with a USB keyboard. The charger is a bit quirky, I might just need a bigger capacitor for it, but it could be the switch I have installed (selectable: ON or OFF/Charge). It charges like it's supposed to but it doesn't always turn the charging status led off when it's finished. Otherwise it works fine. I probably will end up selling the device. Sometimes I get the feeling that I buy stuff because of their inherent limitations, and potential. Once they work like they're supposed to, they're not as interesting anymore.

Just a small factoid for anyone working on USB host mode for this device. Something that I didn't really see mentioned on forums. You need to feed 5V into the 770. Some people on forums actually say the opposite, but it just plain needs it, otherwise it won't notice anything plugged into it :) I wasted some time figuring this out.
Viktor at 2:51 AM 4 comments: 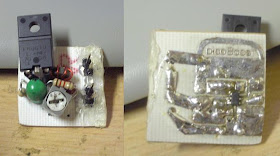 This is an almost completely "by-the-datasheet" implementation of a Linear Technology LTC3462 Boost Converter. Using an almost perfect copy of the recommended board layout. It should be able to deliver 5V @ close to 1A from a single cell Lithium Ion battery, making it ideal for powering USB devices. It does look a bit convoluted, but it works fine, unlike the board I carelessly designed for it the first time. Truth be told it could've been a diode issue with that board, but I don't feel like tracking it down, now that this works. Sadly my choice of schottkies at home came down to 0.6A, which was insufficient and the 4A I ended up using. Nothing inbetween, and nothing in a regular axial diode package. I'll need to buy some BAT54s the next time I order parts. Now as for what I'm actually going to use this for, I'll write that in a couple of weeks. 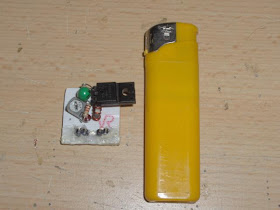 No eagles this time. The recommended pcb layout is on page 6 of the datasheet.
Viktor at 1:11 PM No comments:
‹
›
Home
View web version