Hacking the bq8030 with SANYO firmware

As mentioned in the previous article the bq8030 is the blank version of the bq20z90. If you bought some from Aliexpress they'd come up with the TI Boot ROM and you could use the flashing tool included in SMBusb to upload firmware and eeprom(data flash) to it.
Theoretically you could turn it into a bq20z90 by downloading the firmware from one and uploading that. (The procedure for accessing the Boot ROM on those chips is documented in datasheets and application notes.) 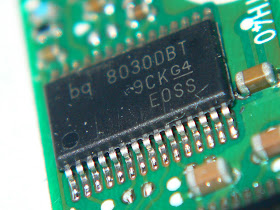 So how would you even start with a BQ8030 running proprietary firmware?

Google. Lots of Google.
Apparently they sell this tool for them::

Now with a SPECIAL! price of ONLY 3 THOUSAND US DOLLARS!! WHAT AN AMAZING DEAL!!!

I gathered everything I could find about this device and while it wasn't much it did provide clues that came in handy later on in the process. Especially this screenshot of the software that comes with it:

There was no way I could figure everything out based on just that but I did take notice of the function bar on the bottom.

Those could very well be SMBus commands right there.. would they have done that? Surely not.
Not really expecting much I tried a word write of 0x0214 to command 0x71 aand.. nothing obvious happened. So I moved on to poking at other things but eventually came back for a second look and that's when I realized:


So this actually unlocks an extra command which disappears again when an SBS command is issued (or when doing a full command scan starting from 0.)
The command however is not writable. Reading it returns:

I couldn't really get any further with just that information so I started looking at the hardware instead. Having found slides from a TI presentation revealing the connection between the BQ8030 and bq20z90 I opened up the datasheet for the latter (since there's no public datasheet for the former). 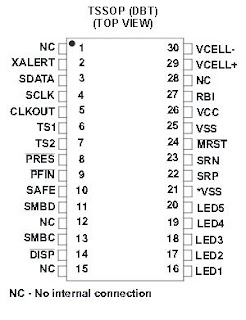 Ok, nothing straightforward. No obvious BOOT pin as one would expect with a device that's not meant to be tampered with. But maybe pulling some pin high or low during reset will get me somewhere.

After the first pass no, not really. So maybe we have to set multiple pins into multiple states for it to work. Or maybe there's no such combination at all.
How about I try to abuse N/C pins instead. I have no logical explanation as to why I came to this decision. Maybe I saw a presentation somewhere about blackbox chips and N/C pins years and years and years ago but I could just be imagining things. Either way, about 5 minutes of poking at PIN #28 with a resistor connected to 3.3v in hand and triggering RESET at random intervals while running a continuous command scan:


Uh-oh.. Well that's not good!
It seems we're stuck in the Boot ROM. Is the chip fried? It's at this point that I coded up the flash tool to try and read the flash contents. (I wasn't really bothered by the chip dying as this was one of 2 sacrificial controller boards I kept just for messing around with.)
And the results? Apparently we can corrupt (ideally just) the first couple of blocks of flash if we bully PIN #28 while the chip is trying to start up. The good news though? (If we're lucky) We get 99% of the firmware, and thanks to Charlie Miller we have a disassembler(zip) for it.

Did messing with Pin #28 even have an effect? Could it just have been the erratic resetting of the chip that triggered the malfunction? Did I short VCELL+ to Pin28 while messing about? Was there high voltage on VCELL+? Was it just ESD?
No idea. But I did manage to reproduce the result on another chip using the same procedure. So when in doubt and you have nothing to lose, act like a caveman, I guess?
The only good thing about this method is that even if you have 0 knowledge about whether there even IS a method for entering the Boot ROM in the firmware let alone what it is there's still a high chance that you'll get in. How much of the firmware survives is another question.

A couple of hours of staring at unfamiliar assembly code later, here are the relevant parts for entering the Boot ROM with annotations:


This is the first password check, seem familiar? It's the one that we saw in the screenshot above 0x0214 to 0x71. It sets an access flag that gets checked later on. Basically if (smbSlaveRecvWord(0x71) == 0x0214) { access_level |= 0x80 }; But wait.. It can set two access flags based on whatever (i3,0x1A) and (i3,0x1B) are. Hrmm.. Well I don't know what those are and can't find where they're set so let's assume the first jeq will not jump once we've given the correct first password because it would make sense. We can also see that it checks the word we send against those mystery bytes somehow and if it likes what it sees it sets access flag 0x40 and the mystery bytes to 0.

A little bit further up we find the entry point for the Boot ROM:

So now we know pretty much what we need to do.

And we've made the educated guess that Step 2 is really "Send 0x???? to 0x71" so we're pretty much done with the disassembly as 16 bits is way within the realm of bruteforceability and since I had another sacrificial board as well as a battery pack running SANYO firmware I had everything I needed to attempt it.
As it turns out there's another mandatory step between 1 and 2 and it was sheer luck that I left it in my brute force loop. 0x73, the command unlocked by sending the first password needs to be read before entering the second password. Which is...*drumroll*

After realizing that the first unlocked command is important (why else would they have made it mandatory otherwise) it's not that surprising that when adding the number returned by it (0x023d) to the bruteforced value we get a nice round result: 0x10000 which is probably what the adding in the assembly and the mystery numbers are all about.

So to sum it all up:

Actually, sending the correct word in Step 3 will unlock several extra commands not just 0x70 for the BootROM entry but they all disappear as soon as you send an unrelated command much the same way as 0x73 does with the first password.

We don't really care about those though because we already have what we wanted:


To actually remove the permanent failure flag we need to look at the eeprom area.
The file is 2048 bytes and it has two sections.

The first 1024 bytes contains the static data (the beginning of which you can see in the hex dump above). It contains all the data set by the manufacturer that never changes during the lifetime of the battery. Design capacity/voltage, serial and model numbers, default settings, etc.
This part is protected by a checksum somewhere which you'll need to find and fix if you want to modify anything in there.

The second part contains the dynamic data. Basically the "log" of the battery with current remaining capacity and similar things that get updated as the battery is cycled.  Also, the failure flag.

You pretty much just need to start mapping out the values and then zeroing or FF-ing out the ones that you can't map to anything to see if that fixes it or breaks something else. There's no checksum on the dynamic area so you are free to modify this section all you want. Repeat until desired outcome is reached. That's what I did.
Some helpful tips:
And the result:

It took the estimate a charge cycle to normalize. This particular battery lasts 2 hours on constant high CPU load after external recharging and clearing of the fail flag. Not bad for a 10 year old battery in a 12 year old machine and since the other choice was THROW IT AWAY AND BUY A NEW ONE  I consider this a win :)

PSA: DO NOT WRITE PROGRAM FLASH. You don't need to rewrite the firmware to recover a battery and there's an issue affecting some platforms/boards that WILL result in a brick if you do, especially if you're using the outdated Windows builds. https://github.com/karosium/smbusb/issues/10
You just need to read/write the data/eeprom flash.