Hacking the R2J240 with LGC firmware


The second battery controller I looked at was the Renesas R2J240-10F020. It's a complete black box with very little information available except for some outtakes from the datasheet on Chinese developer forums. There is very little resemblance to the M37512, an older Mitsubishi/Renesas microcontroller used in earlier battery packs that's fairly well documented.

The first thing you notice is that this chip has the analog frontend integrated (unlike the M37512 or the bq8030) because there's no separate chip for measuring voltages and such. Cells are connected directly to this chip so it's a one-chip solution for building smart batteries. 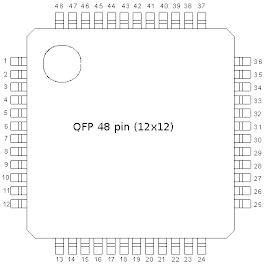 I started out by measuring voltages on all the pins. Just going by logic I was expecting some sort of differentiation on the various sides of the chip.

To summarize my findings after the first pass:
I took a 1k resistor connected to ground and started poking the pins with it to find reset. It should be possible to pull reset low through 1k resistor but unlikely on VCC and it shouldn't lead to a complete reset on an unrelated pin. It's also possible to rule out most pins through visual inspection and measurement. So long story short: Pin #12 is Reset.

Next I wanted to see if there's something like a Boot pin that's going to get me a different mode when pulled either low or high during reset so I started up a continuous command scan and started poking at the pins again.

Pulling Pin #4 (also connected to Test Point 1 on the other side of the PCB) low during reset gave me this:

The chip was ACKing on every command. A deliberate attempt at confusing any would-be attacker perhaps? The write scan however reveals that the chip is actually exposing some real functionality on some of the commands and that a couple of them violate SMBus protocol.

Mapping out the protocol took a while especially because it doesn't correspond to standard SMBus protocol but I was eventually able to figure out how to read and write to RAM and erase blocks of memory-mapped flash.
Just writing to the appropriate address in ram (after the flash blocks have been erased) writes the flash memory which is convenient.

There are several partitions of flash mapped into RAM and I'm sure I haven't found all of them. The ones I did are included as address&length presets in the flasher tool.


In this particular battery pack the static information was stored in df3 and the dynamic in df2, df1 was empty.
Another battery stored dynamic info in df1 so this is going to differ between firmwares/packs.

Just like the bq8030 the static area is protected by a checksum on this controller/firmware as well. I took a shot at it just for kicks and it was pretty simple so I included it in the flasher tool.

No disassembly/ler for this chip. I don't really know what architecture it's based on. If I had to guess I'd say an extended version of the MELPS 7700, an old Mitsubishi architecture that Renesas inherited because trying to load it up in IDA with that core seems to produce something that starts to make sense but fails on invalid instructions. I could be completely wrong though.

If anyone wants to tackle this they could probably find a nice, easy way of getting into the Boot ROM using just SMBus commands.
Viktor at 9:46 AM