The weird fuses in laptop batteries

I called them "externally triggerable fuse" in my first post. The datasheets call them "Combined Thermal Fuse/Resistor" or "Fuse-Resistance protector".
Chances are your first time seeing one of these will be in a smart battery, it sure was for me.

As an over-current protection device (ie. regular fuse) they're probably only going to trigger during catastrophic short-circuit scenarios. Their main purpose is to provide a way for the microcontroller to physically break the circuit if it detects a potentially dangerous condition like the overheating of the cells and can't stop it by shutting the FETs off. The problem is some firmwares will count the sudden disappearance/reappearance of cell voltages amongst the list of conditions that warrant doing this so if you want to re-cell a pack you might end up with a blown fuse.
Replacing or jumping them is a pain so it's a good idea to connect the Reset pin of the controller to ground before doing anything of the sort to keep it from overreacting. 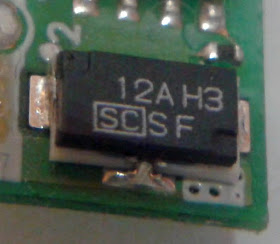 The Cyntec 12AH3 / 12AG3 (datasheet) or similar devices will seem like large capacitors on first sight, though the fact that they have 4 terminals might make you think "current sense resistor". Nope!

The black plastic cap attaches to the ceramic body with glue and you can tease it off with a pair or side-cutters, pliers or tweezers. Here's what you see under it: 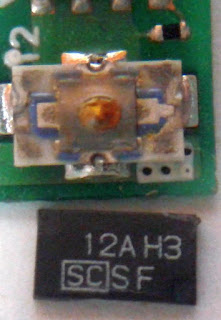 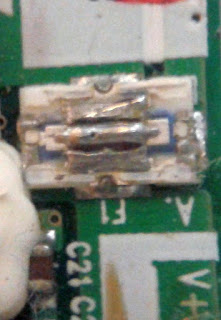 What you have is a rectangle of "solder" (probably some special alloy) with a resistor/heating element under it in this configuration: 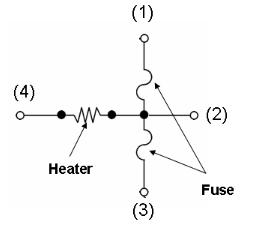 As you can see on the images above, when the device is triggered the thin layer of solder heats up, flows onto the center pad and breaks the connection. The heater is about a 10 ohm resistance so with a 12.6v battery voltage that's 14 watts dissipated on that tiny surface area (or more if the charger voltage is used)

To check this fuse you'd look for continuity on longer sides and for the heater resistance between either contact and Pin 4.
To jump it carefully dab older onto the broken connections. Use low temperature and thin solder. You can probably shave away at it afterwards and the fuse MAY be able to blow again.. unreliably.. and completely of spec.
The best course of action is of course to replace it with a new one once the repair is confirmed.

If the controller is blowing the fuse repeatedly you have an issue in your data or a hardware fault in the controller board or your cell connections.

The SEFUSE D6X / D6T (datasheet) is a weird looking thing that doesn't really resemble any other component.

It's the same deal with a different physical construction. 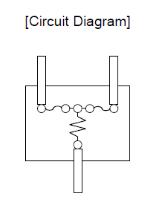 To jump it you break off the cap (if there is one) to find a resin coated square. Then you carefully scrape away at the coating roughly in the middle until you find a tiny via. This is the center point you see in the diagram above. Now you just need to reconnect it to the two leads where the fusible material broke the connection so tin the via and connect it to both leads (ignore the lead for the heater).

As with the previous one, it's best to get a new one once the repair is confirmed.
Viktor at 7:36 AM